So the ADC has done (another!) redevelopment – this time replacing the ceiling and adding air handling in the auditorium. The lampie interest is of course the remodelled ceiling and lighting bridges. This led to quite a lot of updates to the Wyg model and stage plan. It transpires that while the 3D CAD needs to know about a load of stuff it didn’t previously – ceiling shape for example – on the actual stage plan this stuff is better omitted for clarity. But for you, dear reader…

So what’s new? Well in plan view you have two lighting bridges with lx bars on the front and handrail on the rear edges. The red lines show the ceiling – the centre third of which is flat with the edges sloping to meet the top of the auditorium walls. It also slopes the meet the bridges, and the shape between the front bridge and the proscenium is a bit more complicated: 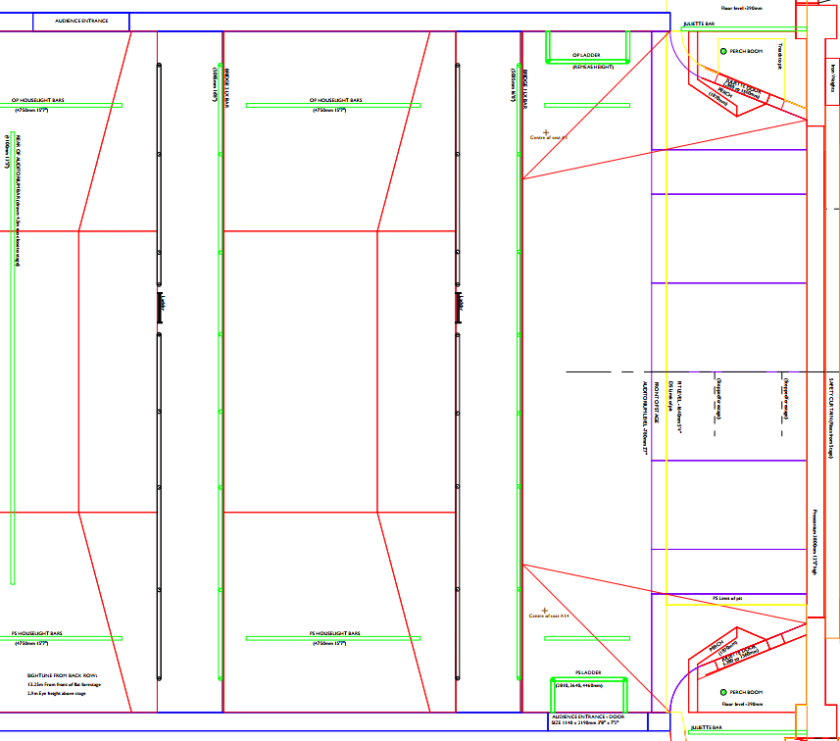 In section view it makes a bit more sense – again the red is the ceiling height in the centre, the blue the top of the auditorium walls: 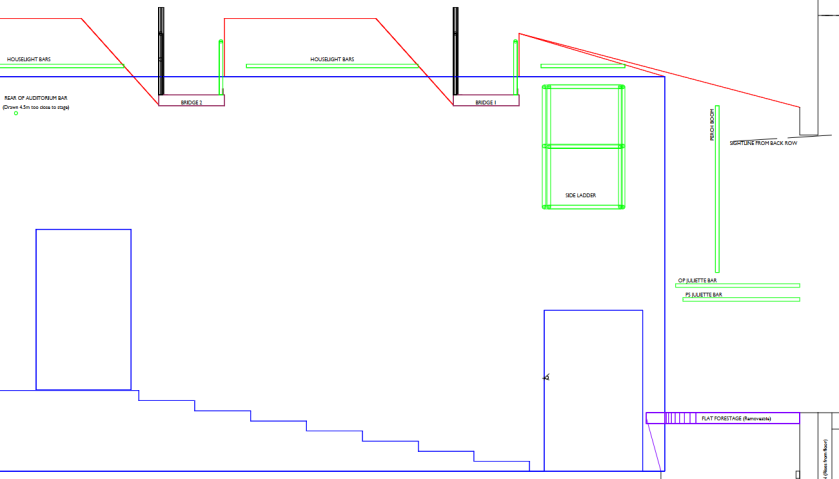 Astute readers will have spotted an issue that has bitten a few people – the ceiling ends up lower than the lx bars at the edges. Hence a whole new plan (“Front Elevation”) has been added to the PDF drawings – with the relevant bit shown below. The other thing to beware is that there are quite a lot of vertical supports to the lx bar – you can’t just rig anywhere. Hopefully these are visible enough as circles on the bar in plan view.

How does it compare to what went before? Well before I consigned the old CAD layers to the dustbin of history I first made them all pink and plotted a few comparisons (old is pink). So the houselight bars move a bit and the new bridges span the position of the old side bars. I’ve shown the 614 on the bridge about as far as it can be rigged towards the edge – whatever you do with your front-light it’ll definitely be more flat and less side-lit in the new world.

What of the angles? Well here’s the section: 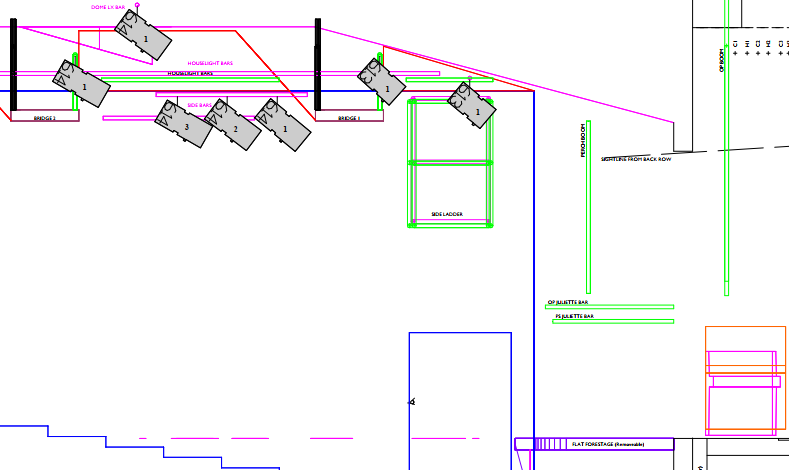 Bridge one is farther from stage than the old bar zero position – welcome for less steep spots on the forestage – perhaps less so for layer 2 frontwash which will end up shallower. Bridge two is even shallower than the old Dome position (also shown). I’ve yet to play with this in detail – but this probably matters more now the layer 1 frontwash isn’t from the sides as the spill will go further upstage and not vanish off into the side-masking. Also shown is the old and (much larger) new DSM desk.

I’ll write more about frontwash when I’ve had time to experiment.

Finally, if you like playing spot-the-difference, here’s a link to three previous versions of the ADC.

One thought on “Redevelopment”